I love a good brewery and Round 6 does not disappoint!!

I have driven past this place a million times and seen the little beer garden lights and always been super curious, so we finally decided to check it out.

Round 6 is slightly hard to find, even though you can see it from Alcoa Highway, you have to turn on like 3 side streets to actually get to the parking.  I advise phones GPS, as always….I actually don’t know how I’d live without it.

We walked into a super empty bar (like 4 people) with zero kids and were at first thinking we would grab a beer and head on, and probably wouldn’t bother adding to the website…boy were we wrong!!

This was in the corner of the bar 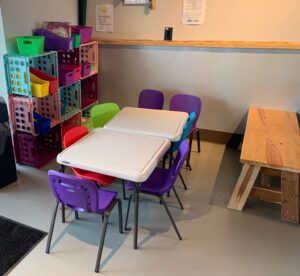 I’m pretty nothing says bring your kid to the bar like a corner dedicated to them! 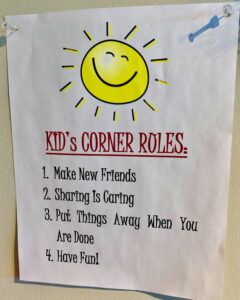 Also in the bar is the magical popcorn machine!  The popcorn is free, fun for kids to watch and my son may or may not have eaten 7 bowls of it...hey, it was Friday. 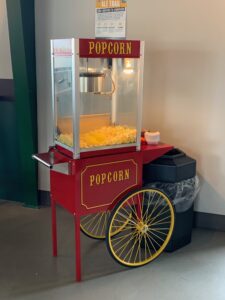 Connected to the bar area is a porch that has a railing on all sides but the stairs.  There are tons of picnic tables and this adorable little fake grass area with tiny Adirondack chairs. 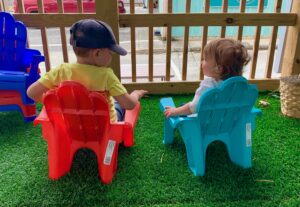 The grass area has only one side unfenced and it’s super easy to keep tiny humans wrangled.  Bonus, the chairs are plastic and really lightweight and fun/easy for kids to move around without anyone getting their toes smashed. 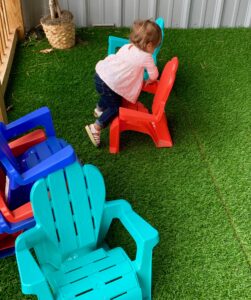 A food truck (or more like a food cart) showed up around 4/4:30 and had great food that everyone loved.  The bartender said there is always a food truck by 5. 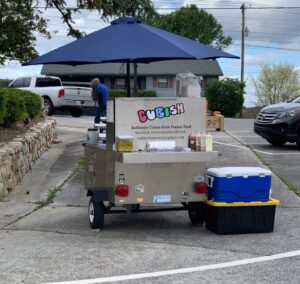 There is also a charcuterie board available that we meant to try, but honestly drank beer instead and forgot. 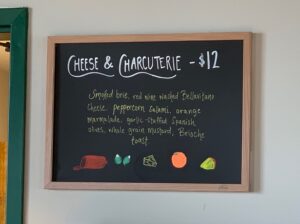 We ate on the little porch and then headed down to the big beer garden. 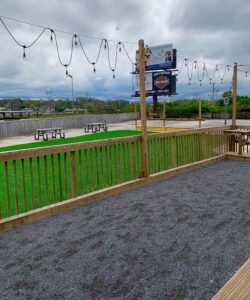 The beer garden area is across the parking lot and down a ramp.  This giant area has a somewhat covered section with tables, an enclosed bacce court, a large fake grass area and a surrounding parking lot.  Also a little stage for bands. 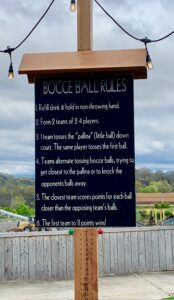 There was tons of construction going on, so I’m not sure how much things will change.  The owner told me that they are working on building an enclosed dog park area next to the beer garden, which will be fantastic.

As for dogs, there were tons.  I actually met the biggest St Bernard I have ever seen at 201lbs!!  (I seriously could not stop hugging him)

At 3:30 on a Friday we were close to the only people there.  But by 6:30, there was a band playing, lots of grown ups (but not too many) and at least 15 kids running around like lunatics.  We were so caught off guard by how fun Round 6 would be, that we had showed up around 3:30 and planned to leave by dinner, and instead ended up inviting friends and staying until almost 9pm!  This may have been the latest my kids have ever stayed up (I’m a little crazy about early bedtimes).  But all the kids were having so much fun, and so were we!  We just couldn’t make ourselves leave.

Oh, and about the beer…the beer is MAGICAL.  They make everything, have tons of options on draft and everything we tried was so good.  Growlers are supposed to be available soon.

The only draw backs to Round 6 are that you have to walk a ways to get your beers from the main bar as beer is not currently served in the beer garden (I know, walking 50 feet is not that big of a deal).  Also, smoking is allowed in the outside areas and as a parent, this always bothers me.