My 1 year old daughter seems to think the car is some sort of torture chamber.  Since birth she has protested consistently and loudly every time she gets even close to her car seat.  This has obviously made long car trips, (or any car trip really) PAINFUL.  I mean getting to the grocery and back can be therapy inducing.  That being said, when we get the ridiculous notion to take a long car trip with the kids, we must stop often.  We have found that it is good for everyones moral if we take nice long leisurely stops about every 2 hours.  So recently, on a crazy expedition to Savannah, we stumbled across one of the coolest beers with kids places! I usually try to research some potential stop locals before we begin our travels, but on this particular trip, when the baby was screaming, I just whipped out trusty google and came upon Fr8yard in Spartanburg, SC.  I wasn't sure what exactly to expect as it was described as a beer garden built in old shipping containers.   I was totally impressed.

The lower area of Fr8yard has tons of super long picnic style tables, perfect for my little red chair. There are large umbrellas for plenty of shade and giant fans that I would assume really cool the place down on a hot day.  They weren't on when we were there because it wasn't too warm out. Downstairs has multiple ping pong tables, corn hole, giant blocks that could be used for Jenga or for a 3 year old boy to build tons of towers. Also there are multiple huge TV screens for any sporting event viewing. As far as good goes, the menu was a crowd pleaser for both kids and parents! The hot dogs and brats that we tried were excellent, as well as the soft pretzel.  The French fries were these cool twisted wedge fries that I have never seen before but LOVED.  There were no complaints from anyone. The beer options were plentiful, as well as some wine and liquor options. The only real drawback that kept Fr8yard from getting a perfect score was the complete and total lack of changing tables in either bathroom.  I have no problem changing my girl on an outdoor table, but I can't imagine that makes all the patrons thrilled.

Overall the food was great, the beer was great, and there was plenty of room for little people to run and play all their car energy out.  The staff were super kid friendly and there were tons of kids there on our random Thursday afternoon.  I expect that we will keep Fr8yard in mind whenever we travel through South Carolina in the future. **This is purely a rating with kids, this place is really great without kids I’m sure all of those people out there that aren’t parents are rolling their eyes and probably not going to read much further, but for those of you that are, read on.

You all probably know the misery of the round crayon.  I mean, who on earth thought it was a good idea to create a children’s product that is to be used on flat surfaces AND ROLLS.

Why is rolling so bad?  I want you to go take something round, anything round, set it on a table then watch it roll off and pick it up over and over and over and over.  Now continue this for about an hour or so, and eat dinner during the process.  Oh, and mediate a few toddler fights, run to the bathroom at least once, and dodge any flying food, all while guarding your beer with your life so that it doesn’t get toppled by tiny hands.

Now, I introduce the triangle crayon. I did not know this was a thing until recently, and for those of you who still don’t know this is a thing, THIS IS A THING!  We have run into these at only a handful of restaurants in all our travels and I don’t know why???  Is it more expensive to make a crayon that is shaped like a triangle instead of a circle??  Is the crayon business so overpowered by one company that no one dares takes on their original design?!  I DON’T KNOW.  Should I start a company that only manufactures non rolling triangle shaped crayons??  Maybe one day…All I do know is that when my children are provided with these magical, stay put entertainment devices, they don’t need me nearly as much.  Sure I still have to referee fights, bathroom run, and cut things into pieces that are obviously the wrong shape/size and must be recut 5 times, but I don’t have to continuously get out of my chair and pick up coloring devices repeatedly.

Restaurants, please hear my cry!  These exist!  Find them, stock them, people will come to you just for this reason!  (at least I would)

I must confess…when these are available at a restaurant, I ask for an extra set for the baby (who obviously can’t color) and I keep them in my bag for use at places that have round crayons, or worse, no crayons. This is a whole other topic: things I take from restaurants….don’t judge, they want me to have these things or they wouldn’t put their name on them.

The clouds parted, the sky turned blue and THE SUN CAME OUT…finally.  This has seriously been the rainiest year ever.  I feel like I moved to Seattle. It was an amazing 75 degrees!!!  SO I dusted off the kids shorts and sandals from last season (which were a lot bit snug) and we headed out on an adventure to Oak Ridge. 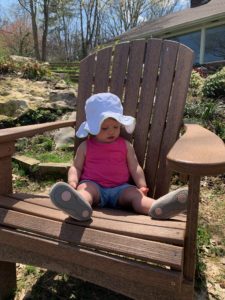 I’ve had several people lately tell me that I needed to check out a specific beer garden in Oak Ridge, but no one could seem to remember the name.  But on a 3 hour Apple store visit…yes THREE HOURS…I think I’m on the payroll now…I was emphatically told by the nicest girl, that I had to go to Crafters Brew Market & Social in Oak RIdge.  So we went. 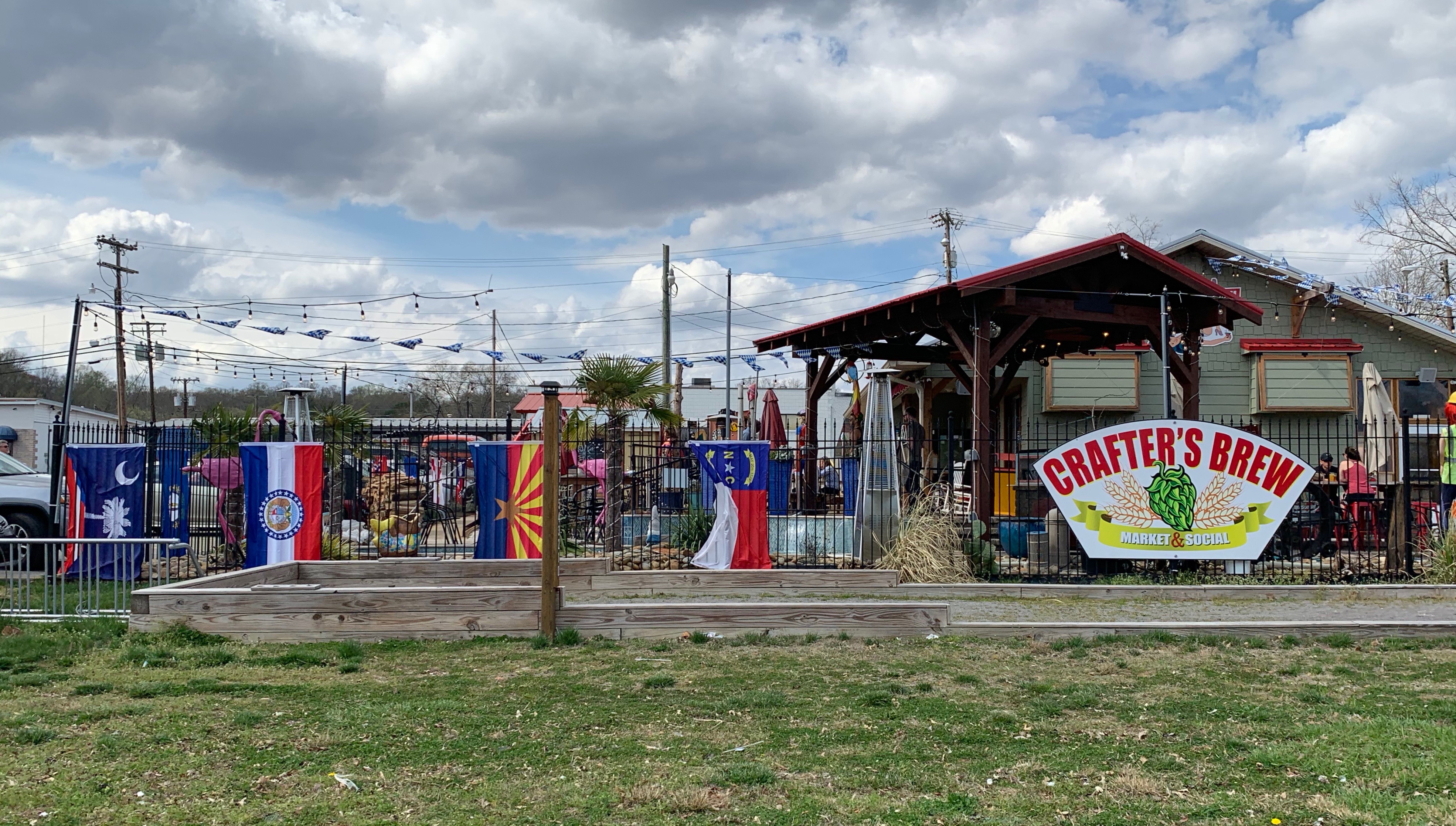 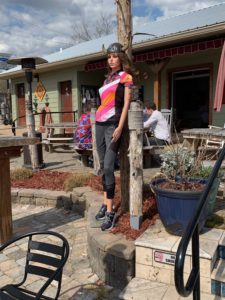 But then I quickly noticed the biggest problem with this place...a large, wide open swimming pool with fountains and NO FENCE. 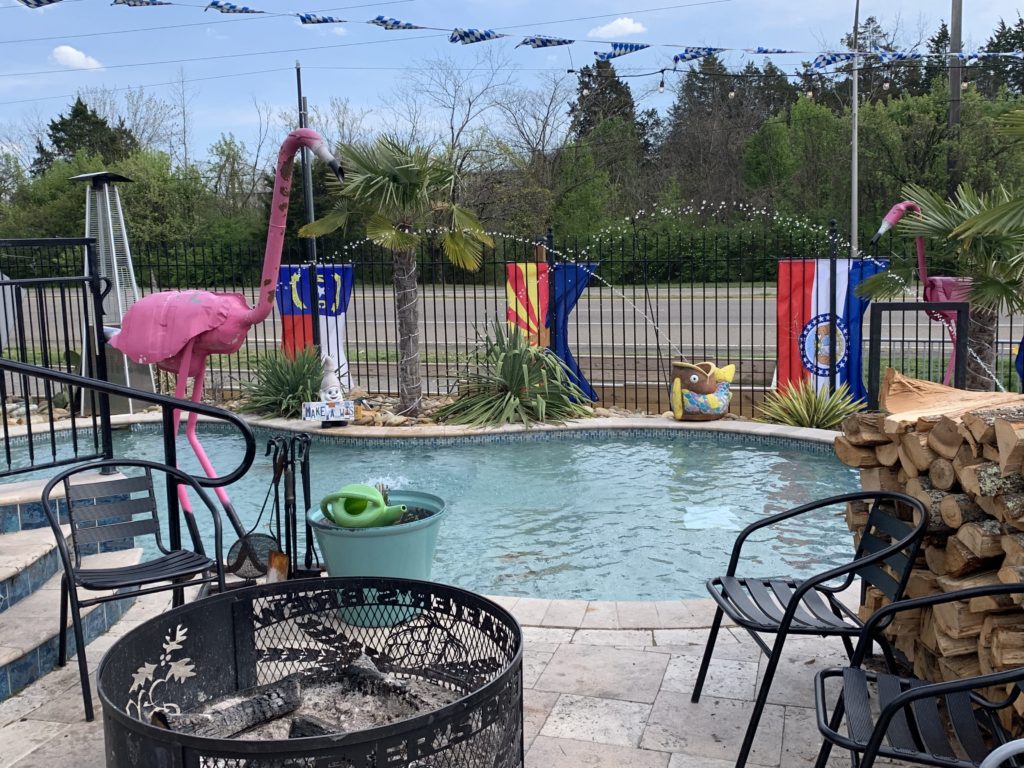 I mean this thing definitely provided some ambiance, but for a mom of little bitty kids, I knew immediately that I would not be able to take my eyes off of my kids for even a second while we were here.  Major bummer on sunny BeersWithKids day. So we found a table as far away from this death trap as possible.

Crafters Brew has tons of awesome beers on tap of all varieties.  I could tell by the giant boxes of out of use taps that they probably rotate their selections frequently.  So this made for happy parents.  Also, the beer line cleaning date was a super happy surprise.  (I once had a friend that worked in beer sales and I learned all about just how DISGUSTING those lines get.) 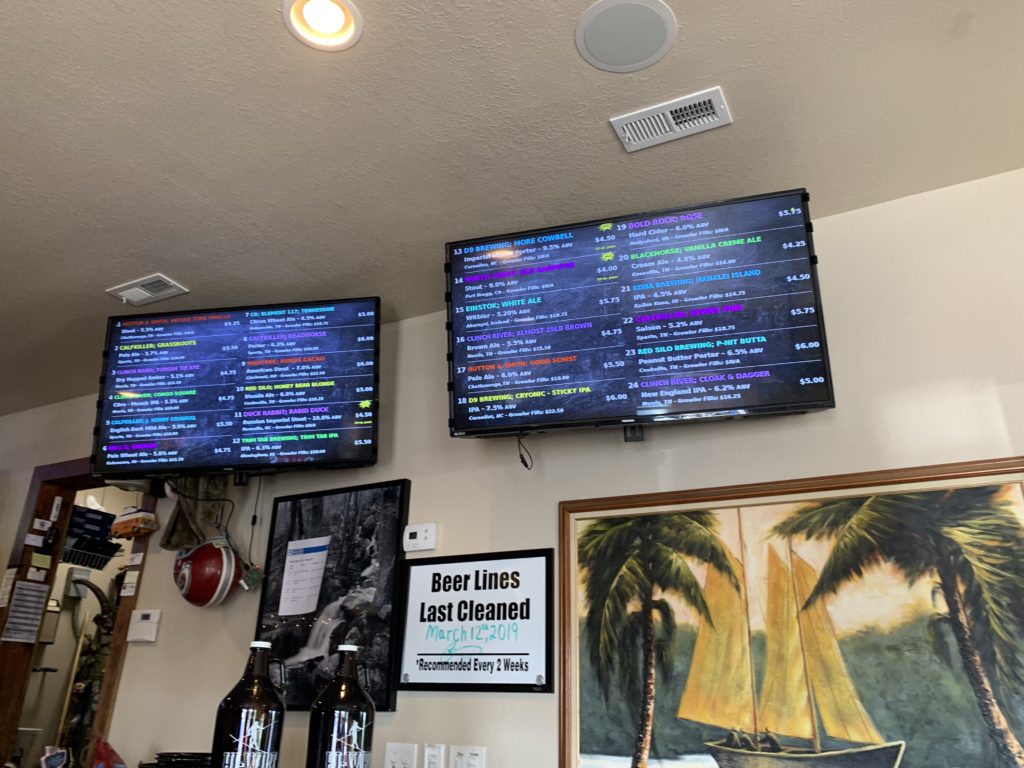 As far as kids activities, there was a plethora of old board games by the bar for use.  Unfortunately for us, the only game that may 3 year old could really handle was Connect-4 and it was broken.  Other than that, there were dart boards and some bagged up yard games.  All would be great for older kids, but not mine.

There are no high chairs (but you don't need them if you have the litte red chair!) and no changing tables.  But dogs seemed super welcome.

For food, they have an associated restaurant across the parking lot. The lady who works there is super sweet and calls you "sweetie" in the way that just makes you feel loved and not condescending... The menu is standard bar food and pizza.  We got a giant pretzel that was a kid pleaser. 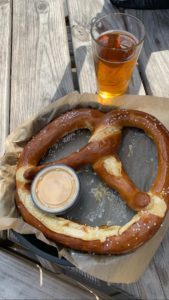 We stayed for one beer then had to leave because the progeny were getting restless and I absolutely could not let them run around with that death trap of a pool.

All in all I feel like this place is super cool for grown up kids (i.e. parents without their kids) or for school aged kids. There are tons of activities for kids that don't require supervision for survival.  If you're kids younger or prone to making stupid spontaneous decisions about unsupervised bodies of water, then maybe make another choice. There is so much stuff for kids, so much, way too much.  I confess that we own most everything…mostly sleep related stuff because my first child refused to sleep for like THREE YEARS!!  but that’s a story for another day.  Today we talk about this magical (I love that word) red chair.  It doesn’t only come in red, that just happens to be the color that I own because I love red.  This type of chair comes in many different brands, the one I own is the Inglesina Fast Table Chair, so I can only speak for that specific one, although I’m guessing they are all pretty similar.  I got this chair as a hand me down from my SIL and thought it was cute but wasn't sure if I would actually use it.  I mean, I own a high chair, why do I need another one that just hangs from a counter or table?  Then I discovered ALL THE POSSIBILITIES.  This chair travels everywhere.  It can go to any restaurant and connect to any table.  So all those places that don’t have high chairs available, or those fabulous outdoor spots that only have picnic tables or high tops…solution.  But it gets better!  Even if there are high chairs available they require a decent amount of space.  This little buddy can hook onto a table right over a booth seat so you don’t need high chair space.  It can also snuggle between two larger people in real chairs on a smaller table.  But wait, THERE'S MORE! This chair sits higher than a traditional high chair.  So for the littlest people, it holds them at an actual eating and/or interacting level at a table.  If any of you have ever thrown a one year old in a traditional restaurant high chair, you have probably noticed that they can barely even reach the table.  When our babies are super little, like 4 months little, we put them in this magic chair and just shove a jacket, snack bag, or whatever softish object is traveling in my diaper bag, behind the kid and it helps them sit up at the table like a big kid.

I seriously cannot sing this chair’s praises enough.  I encourage every pregnant person to register for one and every new parent to run out and buy one.  Without this chair our BeersWithKids travels would absolutely not be possible.

This blog is sponsored by…except I’m not sponsored.  How about, this website made possible by, but not funded by, the fantastic Inglesina chair!!